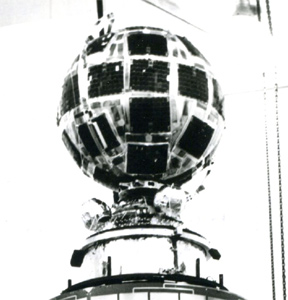 The DAD A (Dual Air Density Explorer-A) satellite was a 0.76 m rigid sphere designed to determine, in conjunction with DAD B (Dual Air Density Explorer-B), the vertical structure of the upper thermosphere and the lower exosphere as a function of latitude, season, and local solar time. Both satellites would have been launched by a single Scout-F1 launch vehicle into coplanar polar orbits. Measurements of atmospheric density from DAD-A would have been obtained from satellite drag analyses near perigee (approximately 350 km) and from composition measurements taken by an onboard mass spectrometer. DAD-A was equipped with a radio beacon to facilitate tracking.

The Atmospheric Composition Mass Spectrometer experiment on DAD-A was designed to perform composition measurements in the upper thermosphere (approximately 350 km). The instrument was a magnetic mass spectrometer with a Mattauch-Herzog geometry and would have measured the distribution of such atmospheric constituents as oxygen, mitrogen, helium, hydrogen, neon, and argon.

The launch of the DAD satellites failed on 6 December 1975.