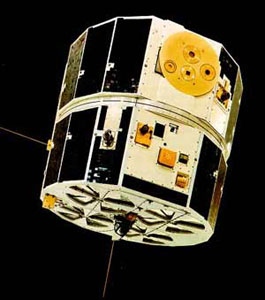 The purpose of the AE-C (Atmosphere Explorer) mission was to investigate the thermosphere, with emphasis on the energy transfer and processes that govern its state. The study of photochemical processes accompanying the absorption of solar UV radiation in the earth's atmosphere was accomplished by making closely coordinated measurements of reacting constituents and the solar input. The AE-C spacecraft was a multi-sided polyhedron with a diameter of approximately 1.4 m. It weighed about 660 kg including 85 kg of instrumentation. The initial elliptical orbit was altered many times in the first year of life by means of an onboard propulsion system employing a 3.5-lb thruster. The purpose of these changes was to alter the perigee height to 129 km. After this period, the orbit was circularized and was raised periodically to about 390 km when it would decay to 250 km altitude. During the first year, the latitude of perigee moved from about 10 deg up to 68 deg north and then down to about 60 deg south. During this period about two cycles through all local times were completed. The spacecraft could be operated in either of two modes: spinning at a nominal 4 rpm or despun to 1 revolution per orbit. The spin axis was perpendicular to the orbit plane. Power was supplied by a solar cell array. The spacecraft used a PCM telemetry data system that operated in real time or in a tape recorder mode. The payload included instrumentation for the measurement of solar UV; the composition of positive ions and neutral particles; the density and temperature of neutral particles, positive ions and electrons; the measurement of airglow emissions, photoelectron energy spectra, and proton and electron fluxes up to 25 keV.

The purpose of the AE-D mission was to continue the investigation begun by AE-C of the chemical processes and energy transfer mechanisms that control the structure and behavior of the earth's atmosphere and ionosphere in the region of high absorption of solar energy. This mission was planned to sample the high latitude regions at the same time that the AE-E mission was sampling the equatorial and low latitude regions. The same type of spacecraft as AE-C was used, and the payload consisted of the same types of instruments except for deletion of the extreme solar UV monitor and the Bennett ion mass spectrometer, which were part of the AE-E payload. The polar orbit provided the sampling of all latitudes and the perigee moved through all latitudes in 3 months and all local times in 4 months. Unfortunately, a failure in the solar power panels resulted in the termination of operations on 29 January 1976, after slightly less than 4 months of useful life. However, all the regions at the perigee altitudes were sampled during this time. The spacecraft re-entered the atmosphere about 1 month after cessation of telemetry. To continue the correlated observations with the AE-E mission, AE-C was reactivated on 28 February 1976, to replace AE-D.

The purpose of the AE-E mission was to investigate the chemical processes and energy transfer mechanisms that control the structure and behavior of the earth's atmosphere and ionosphere in the region of high absorption of solar energy at low and equatorial latitudes. The simultaneous sampling at higher latitudes was carried out by the AE-D spacecraft until its failure on 29 January 1976, and then by AE-C, until it reentered on 12 December 1978. The same type of spacecraft as AE-C was used, and the payload consisted of the same types of instruments except that the low-energy electron and UV nitric oxide experiments were deleted and a backscatter UV spectrometer was added to monitor the ozone content of the atmosphere. The two experiments that were deleted were more appropriate for the high-latitude regions. The perigee swept through more than six full latitude cycles and two local time cycles during the first year after launch when the orbit was elliptical and the perigee height was varied between 130 and 400 km. The circularization of the orbit around 390 km was made on 20 November 1976 and the spacecraft was raised to this height whenever it would decay to about 250 km. AE-E reentered on 10 June 1981.