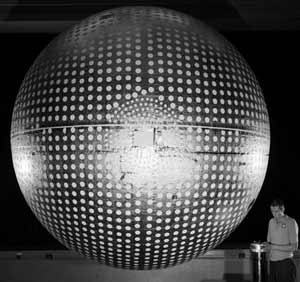 The AD (Air Density) series Explorers were balloon satellites with a beacon transponder for tracking. Their purpose was to measure the density of the upper atmospheric layers.

Explorer S-56 was a 3.7 m sphere intended to determine the density of the earth's atmosphere. It was the first attempt to place a satellite in orbit using an all-solid propellant launch vehicle and the first orbital attempt made from NASA's Wallops Island facility. The second stage failed to ignite and the spacecraft did not achieve orbit, impacting in the Atlantic Ocean, 130 km east of Wallops Island.

Explorer 9 was the first in a series of 3.66 m inflatable spheres to be successfully placed into orbit solely for the determination of atmospheric densities. It was identical in its objectives and configuration to the earlier unsuccessful launch of Explorer S-56. The spacecraft consisted of alternating layers of aluminum foil and Mylar polyester film. Uniformly distributed over the aluminum surface were 5.1 cm-diameter dots of white paint for thermal control. The sphere was packed in a tube 21.6 cm in diameter and 48.3 cm long and mounted in the nose of the fourth stage of the launch vehicle. Upon separation of the third and fourth stages, the ejection bellows, a nitrogen gas bottle, inflated the sphere and a separation spring ejected it out into its own orbit. The two hemispheres of aluminum foil were separated with a gap of Mylar at the spacecraft's equator and served as the antenna. A 136 MHz, 15 mW beacon was carried for tracking purposes, but the beacon failed on the first orbit and the SAO Baker-Nunn camera network had to be relied upon for tracking. Power was supplied by solar cells and rechargable batteries. Explorer 9 was the first spacecraft placed in orbit by an all-solid rocket and the first spacecraft successfully launched from Wallops Island. The spacecraft reentered the earth's atmosphere on 9 April 1964.

Explorer 19 was the second in a series of 3.66-m inflatable spheres placed into orbit to determine atmospheric densities. Explorer 19 was launched while Explorer 9, the first satellite in the series, was still active, so that densities in two different portions of the atmosphere were sampled simultaneously. The satellite consisted of alternating layers of aluminum foil and plastic film. Uniformly distributed over the aluminum outer surface were 5.1-cm dots of white paint for thermal control. A 136.620 MHz tracking beacon, which was powered by four solar cells and was mounted on the spacecraft skin, used the electrically separated hemispheres of the balloon as an antenna. The spacecraft was successfully orbited, but its apogee was lower than planned. The beacon did not have sufficient power to be received by ground tracking stations, making it necessary to rely solely on the SAO Baker-Nunn camera network for tracking.

Explorer 24 was placed in orbit together with Explorer 25 from a single launch vehicle. Explorer 24 was identical in configuration to the previously launched balloon satellites Explorer 9 and 19. The spacecraft was 3.6 m in diameter, was built of alternating layers of aluminum foil and plastic film, and was covered uniformly with 5.1-cm white dots for thermal control. It was designed to yield atmospheric density near perigee as a function of space and time from sequential observations of the sphere's position in orbit. To facilitate ground tracking, the satellite carried a 136 MHz tracking beacon. The satellite reentered the earth's atmosphere on 18 October 1968.

Explorer 39 was an inflatable sphere, 3.6 m in diameter. It was orbited to make atmospheric density determinations. The spacecraft was successfully launched into a nearly polar, highly elliptical orbit. It was folded and carried into orbit, together with ejection and inflation equipment, as part of the payload of Explorer 40. Two density experiments were performed. One involved the study of systematic density variation, and the other was concerned with nonsystematic density changes. The upper atmospheric densities were derived from sequential observations of the sphere by use of an attached 136.620 MHz radio tracking beacon and by optical tracking. The radio beacon ceased transmitting in June 1971. Since that time it has been necessary to rely solely on the SAO Baker-Nunn camera network for tracking. Explorer 39 has an expected orbital lifetime of 50 years.

The Dual Air Density Explorer-B (DAD-B) satellite was a 3.66-m inflatable sphere designed to determine, in conjunction with Dual Air Density Explorer-A (DAD-A), the vertical structure of the upper thermosphere and lower exosphere as a function of latitude, season, and local solar time. Both satellites would have been launched by a single Scout launch vehicle into coplanar polar orbits. Measurements of atmospheric density from DAD-B would have been obtained from satellite drag analysis near perigee (approximately 700 km) and from composition measurements taken by an onboard spectrometer. DAD-B was equipped with a radio beacon to facilitate tracking.