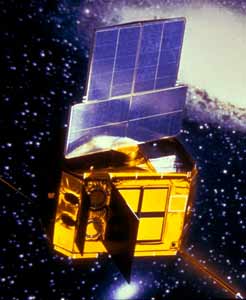 The scientific mission of the Exosat (European X-Ray Observatory Satellite) was to measure the position, structural features, and spectral and temporal characteristics of cosmic X-ray sources in the approximate range 0.O4 to 80 keV. EXOSAT used two operational modes:

The observatory, placed in a highly eccentric orbit with its apogee at 200,000 km and at a high latitude, was capable of observing lunar occultations over 20% of the celestial sphere within a year. The positional accuracy of bright (>1E-2 photons/sq cm-s in the range >1.5 keV. sources was limited to about 1 arcsec by the inaccuracy of measurement of the position of the satellite and the uncertainty of the topography of the lunar limb. For weaker sources, the accuracy was limited by statistics; i.e., the total number of X-ray quanta received during the time of the corresponding angular displacement of the moon. When not engaged in occultation observations, the observatory could view the sky uninterruptedly in any chosen direction (except 60 deg about the solar direction) for as long as the orbital period was above the Van Allen belts (approximately 80 hours). With accurate timekeeping on board, and with the capability of long continuous observation, EXOSAT could determine regular and irregular variations of the intensity of X-ray sources on a time scale ranging from tens of microseconds to tens of hours.

The triaxial stabilized spacecraft was cylindrical with a diameter of 192 cm and a height of 117 cm. A rotatable solar array with an area of 3 sq m was mounted on top of the spacecraft. The star trackers were mounted on the optical benches of the two imaging telescopes to facilitate alignment and stability. In the occultation mode, the observatory was able to view all of the celestial sphere except for a cone of half-angle 15 deg centered on the sun; in the arbitrary pointing mode the excluded cone was a cone of half-angle 60 deg, also centered on the sun. Consumables were distributed to enable some 100 orbital maneuvers for lunar occultation to be undertaken and over 2000 targets to be observed. The scientific payload was funded by ESA and its development managed by ESA.