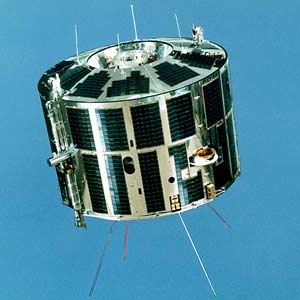 This satellite was a part of Japan's contribution to the International Magnetospheric Study. The mission objectives were to observe the aurora borealis, study aurora-related phenomena, and study the ionosphere and magnetosphere. The main body of the spacecraft was a cylinder 0.946 m in diameter with shallow truncated cones attached at both ends. Most of the surface was covered with solar cells that produced 35 W. Two booms of roughly 1.9 m each extended outward from the equator of the main body. At the tip of each boom was a permanent magnet to provide alignment of the spacecraft center axis along the local geomagnetic field line. Two sets of circularly polarized quadrupole antennas, one for UHF (400 MHz) and another for VHF, extended from opposite ends of the spacecraft. The VHF antenna was diplexed for telemetry (136 MHz) and command (148 MHz). Other attitude sensors included a vector magnetometer and a solar sensor. The spacecraft contained a tape recorder to store 160 min of data at 512 bps or 40 min at 2048 bps, with readout in 10 min at 8192 bps. Besides the solar cells, there was a nickel-cadmium battery for nighttime operation.

The scientific instrumentation was: