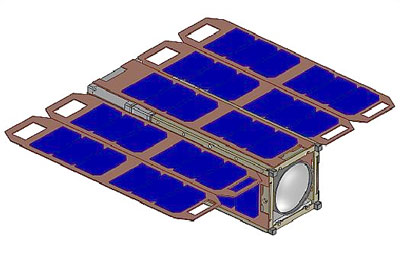 ExoplanetSat was a cooperative nanosatellite technology demonstration mission of MIT (Massachusetts Institute of Technology) and Draper Laboratory, both of Cambridge, MA, USA. The overall objective is to test the ability to use nanosatellites to search for unmapped planets - and to complement existing planet-hunters like NASAs Kepler space telescope and ground-based assets.

If the performance of the tiny prototype ExoplanetSat is considered adequate, the demonstration will offer NASA the ability to dedicate relatively inexpensive assets to stare at a star for long periods of time to look for transits  decreases in brightness that suggest a previously unmapped Earth-like planet passed between the viewer and the star.

Exoplanets are planets orbiting stars other than the sun. To gain reliable data, the ExoplanetSats imager is required to keep the target star in the same fraction of a pixel during its observations. Drapers expertise in optics, guidance, navigation and control technology is being applied to develop a sub-arcsecond pointing and stabilization system for ExoplanetSat.

The ExoplanetSat spacecraft will attempt to detect exoplanets using the transit method. In phase 1 of the program, a single prototype nanosatellite will be flown to demonstrate the following capabilities:

A launch of ExoplanetSat wass scheduled for late 2012 or in 2013. In January, 2011, the ExoplanetSat mission was selected under the NASA CubeSat launch initiative. ExoplanetSat will be loaded into a P-POD (Poly-Picosatellite Orbital Deployer) system as a secondary payload and deployed once the nominal orbit is attained.

ExoplanetSat has since been transfered from MIT to JPL after lab-based tech demo and morphed into ASTERIA, a 6U Cubesat capable of high photometric precision on bright stars, whose program includes the search for transiting exoplanets.