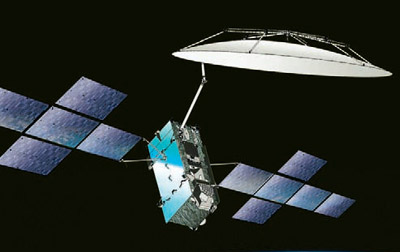 Thales Alenia Space and Inmarsat signed in August 2008 an ATP (Authorization To Proceed) for the development of the EuropaSat satellite to provide mobile broadcast and two-way telecommunications services in the S-Band throughout Europe. This signature confirms and consolidates Thales Alenia Space's strong in-house experience and long heritage in S-Band payloads.

Thales Alenia Space will commence work on the satellite design, based on its Spacebus-4000C3 platform and develop it through timely Critical Design Review to support a fully compliant application for a EC-wide S-band spectrum allocation by Inmarsat, under the recently-announced European S-Band Application Process ("ESAP" - European Selection and Authorisation Process). The spacecraft will carry a payload at 2 GHz generating 9 S-Band user spot beams in 2 polarizations, using a large S-Band Tx antenna of 12 meters diameter.

Designed with a lifetime of 15 years, the EuropaSat satellite will have a launch mass of 5.7 tons and will deliver 8.5 kW of payload power. The satellite was expected to be launched in early 2011 by a Proton-M Briz-M, in compliance with the ESAP, and to be placed at 31°E to deliver services across the whole of the European landmass. The spacecraft manufacturing programme supports Inmarsat's imminent application for an award of S-band spectrum, pursuant to the ESAP, which commenced on 7 August 2008, and is subject inter alia to a successful outcome of the ESAP for Inmarsat.

The EuropaSat has been put on hold in late 2009. Inmarsat instead plans to seek external investors to fund the project, and ultimately to spin it off as a separate company.

In 2014, the project was revived as a joint project with Arabsat, which will be named HellasSat 3 / Inmarsat-S-EAN (EuropaSat).