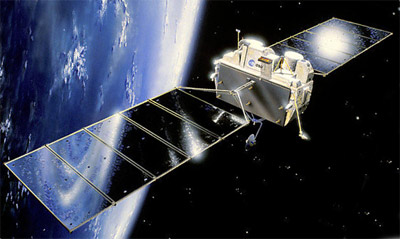 The European Space Agency's (ESA) European Retrievable Carrier (EURECA) was designed to be launched from the USA Space Shuttle, retrieved from another space shuttle flight 6 to 9 months later, refurbished on the ground and re-flown on another shuttle flight. The first mission (EURECA-1), launched from STS 46 and retrieved by STS 57, was primarily devoted to research in materials and life sciences and radiobiology, all requiring a controlled microgravity environment. Experiments were also conducted in earth science, solar physics, space physics and astrophysics.

EURECA was made of high-strength carbon-fibre struts and titanium nadal points joined together to form a framework of cubic elements. Thermal control on EURECA combined both active and passive heat transfer and radiation systems. Active heat transfer was achieved by means of a freon cooling loop which dissipitated the thermal load through two radiators into space. The passive system made use of multilayer insulation blankets combined with electrical heaters.

The electrical subsystem was powered by deployable and retractable solar arrays together with four 40 amp-hour nickel-cadmium batteries. When EURECA was in the Shuttle cargo bay, power was supplied by the Shuttle. The modular attitude and orbit control subsystem (AOCS) maintained attitude and spacecraft orientation and stabilization. An orbit transfer assembly, consisting of four thrusters, was used to boost EURECA to its operational attitude (515 km) and return it to retrievable orbit (about 300 km).

EURECA was three-axis stabilized by means of a magnetic torque assembly together with a nitrogen reaction contral assembly (RCA). Data handling was carried out by EURECAs data handling subsystem (DHS) supported by telemetry and telecommand subsystems providing the link to the ground station.

EURECA was attached to the Shuttle cargo bay by means of a three-point latching system. EURECA operations were controlled by ESA's Space Operations Centre (ESOC) in Germany. The EURECA project was sponsored by the Italian Space Agency (ASI). EURECA was developed under ESA contracts with aerospace firms in Germany, Italy, the UK, Belgium, the Netherlands, and France.

Two more missions with different exeperiments, Eureca 2 and 3, were planned for 1995 and 1998, but were cancelled.

Eureca 2 was to carry following payloads: