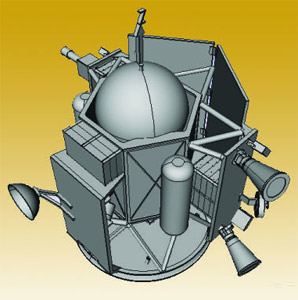 The ESMO (European Student Moon Orbiter) was a planned lunar orbiter mission to be developed, integrated, and tested by European university students as part of the ESA Education Office projects.

ESMO was to be the fourth mission within ESAs Education Satellite Programme and levaerages upon the experience gained with SSETI Express satellite (launched into LEO in 2005), YES2 tether/re-entry capsule experiment (launched into LEO on the Foton-M3 mission in September 2007) and ESEO satellite (the European Student Earth Orbiter planned for launch into LEO in 2013). About 200 students from 20 Universities in 11 countries were participants in the ESMO project.

The ESMO spacecraft was designed to be launched into Geostationary Transfer Orbit (GTO) as a secondary payload in the 2014 timeframe. A 2.5 kg narrow angle camera will be used for providing medium-resolution images of the lunar surface at specific locations upon request from schools. This will be operated from a highly eccentric lunar orbit. Further payloads, that were studied, were a small radar payload, a radiation monitor, a 2.5 kg passive microwave radiometer (temperature of the regolith a few meters below the surface), and a telecommunication experiment to test a lunar internet protocol. All might be operated from the same orbit as the camera.

System Prime Contractor was Surrey Satellite Technology Limited (SSTL), managing the ESMO project for the ESA Education Office and providing considerable system-level and specialist technical support to the university student teams during the implementation of the project until launch and early operations. The participating universities had been finalised at the System Design Review in June 2010.

Spacecraft subsystems, payload and ground support systems were to be developed and built by the student under supervision by their universities and the prime contractor as part of their academic studies. Flight spare hardware was also to be donated by ESA where justified to lower project cost and risk.

In March 2012, the ESMO project passed its Preliminary Design Review. However, although the review board was confident that the missions objectives could be met, ESAs Education Office has announced that the project will not continue to the next phase, as it was not sustainable within current budget constraints.