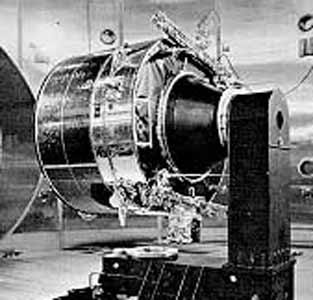 The ESA-GEOS 1 (Geostationary Earth Orbit Satellite) spacecraft was to have been the first satellite placed in the equatorial geostationary orbit that was dedicated completely to scientific measurements. Unfortunately, a launch vehicle failure made it impossible to achieve this orbit and resulted in the decision to place the spacecraft in a 12-h, commensurate, final orbit where the instruments could make the planned measurements for about 6 h each revolution between 5 and 7 earth radii. In this orbit the mission was still able to serve as a core or reference spacecraft for the International Magnetospheric Study (IMS), and carried out planned correlative measurements with extensive ground-based networks in Scandinavia and conjugate point measurements between a station in Iceland and in Antarctica. In addition, because of a second daily apogee at a different geographic position, correlative measurements with IMS ground-based networks in Alaska and western Canada were also carried out. The payload consisted of instruments to measure

Except for minor modifications to certain experiments, ESA-GEOS 2 and its instruments were identical to ESA-GEOS 1. ESA-GEOS 2 reached its planned orbit and conducted its experiments.Because one solar panel developed a short circuit soon after launch, a number of the experiments were able to obtain useful data for only one-half of the spin period.

The spacecraft was cylindrical with a height of 1.321 m. The total mass exclusive of propellants was 273.6 kg. There were four telescopic axial booms of 2.5-m length for the wire-mesh spheres of an AC electric field experiment; two 20-m cable booms for magnetic and electric field sensors and for an excitation antenna for plasma resonances; and two locking radiant booms of 3-m length for a variety of instruments. There were six hydrazine thrusters; two were to tilt and precess the spacecraft, two were used to modify the orbit so the longitude of the apogee could be moved to different geographic locations, and two were used for spin up and spin down. The spin rate was nominally 10 rpm. Since this mission was planned for the geostationary orbit, no storage of data was provided. Data were telemetered in real time at 137.2 MHz (186 and 744 bps) and at 2299.5 MHz (11.91 or 95.25 kbs). Attitude measurements were obtained by a sun sensor, dual infrared earth sensor, and accelerometers. Power was supplied by 7200 solar cells mounted on the cylindrical spacecraft surface. To prevent spacecraft differential charging, 96% of the surface was made electrically conductive. Because of the importance of the magnetic field measurements, the spacecraft residual field at the magnetometer was made less than 0.3 nT.