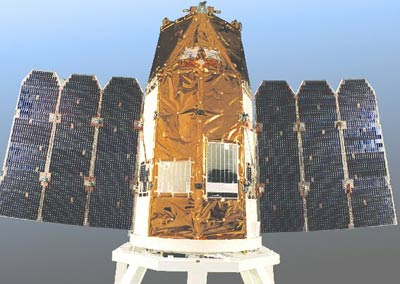 EROS A (Earth Resources Observation Systems A) is the first in a constellation of sun-synchronous, polar-orbiting satellites that ImageSat plans to deploy during this decade.

EROS A, which weighed 250 kg at launch, orbits at an altitude of 480 km in a sun-synchronous orbit ensuring that all images are taken at the same local time at each pass. EROS A is equipped with a camera whose focal plane of CCD (Charge Coupled Device) detectors produce a standard image resolution of 1.8 meters at a swath of 13.5 km at Nadir (perpendicular to the surface), and sub-meter resolution using hypersampling techniques. The data transmission rate is 70 Mbit/s, and the anticipated lifespan of the EROS A satellite is six to ten years. ImageSat expect it to work for 14 years.

EROS A was launche on 5 December 2000 on a Start-1 booster. The satellite performed its last orbit rising manoeuvre on 24 April 2012 and finally reentered on 7 July 2016.