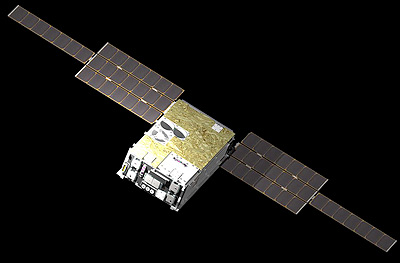 EQUULEUS (Equilibrium Lunar-Earth point 6U Spacecraft) is a small lunar mission designed jointly by the Japan Aerospace Exploration Agency (JAXA) and the University of Tokyo.

It will measure the distribution of plasma that surrounds the Earth to help scientists understand the radiation environment in the region of space around Earth. It will also demonstrate low-energy trajectory control techniques, such as multiple lunar flybys, within the Earth-Moon Lagrangian points (EML).

EQUULEUS is equipped with the AQUARIUS propulsion system consisting of eight water thrusters also used for attitude control and momentum management. The spacecraft will carry 1.5 kg of water, and the complete propulsion system occupies about 2.5 units out of the 6 units total spacecraft volume.

EQUULEUS is one of 13 cubesats planned to be carried with the Orion Artemis-1 mission into a heliocentric orbit in cis-lunar space on the maiden flight of the SLS (Block 1) iCPS launch vehicle in 2021.