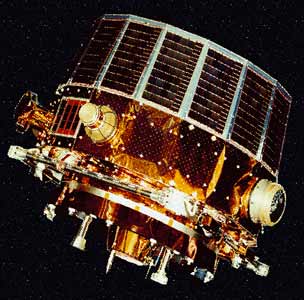 The Equator-S objectives are to provide high-resolution plasma, magnetic, and electric field measurements in several regions not adequately covered by the existing ISTP missions, namely the low-latitude dayside magnetopause and its boundary layer, the equatorial ring current region, and the near-earth equatorial plasma sheet. These regions play key roles for our understanding of the global perspective of solar-terrestrial relations as well as the detailed plasmaphysical processes.

The orbit is near-equatorial, with 500 km perigee altitude and 11 Re geocentric apogee distance. The payload consists of seven scientific instruments provided by international groups to study the solar wind and charged particles trapped in the earth's magnetosphere. For reasons of cost and schedule, these instruments are largely derived from engineering or spare units from other ISTP missions. Innovative sub-systems for solar power and orbit measurement are tested on Equator-S for the benefit of future spacecraft designs. Furthermore, some technological experiments have been added that exploit the hard radiation environment of the Equator-S orbit or make use of its orbital features. The rapid spacecraft spin rate (60 rpm) allows unprecedented high temporal resolution of the measurements.