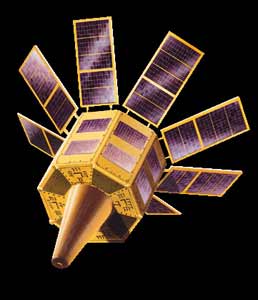 The octagonally shaped satellite measured 0.71 m across opposite corners and was 0.58 m long. Electrical power (20 W average) was supplied by eight rectangular solar panels deployed 45 deg from the EOLE 1 upper octagonal structure after orbital insertion, and by 15 rechargeable silver-cadmium batteries. Constant earth orientation was maintained by a deployable 10.06-m gravity gradient boom. Satellite spin was near zero rpm in orbit, and the attitude was programmed to remain stable within 9 deg of local vertical. The data were stored on board the spacecraft and unloaded on command when the spacecraft was within range of the ground station. The onboard telemetry consisted of (1) a 136.350 MHz downlink transmitter for relaying balloon telemetry to ground stations and also to serve as a tracking beacon, (2) a 148.25 MHz receiver for receiving spacecraft commands and telemetry programs for balloon operations, and (3) a spacecraft-to-balloon transmitter (464.84 MHz) and receiver (401.7196 MHz). The satellite operation was successful with the exception of the inadvertent destruction of 71 balloons by an erroneous ground command. The last balloon ceased transmitting in January 1973. However, the spacecraft was subsequently used to track and receive data from ocean buoys, icebergs, and ships.