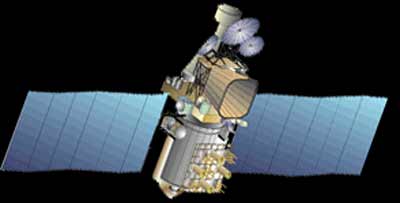 Elektro (or GOMS, Geostationary Operational Meteorological Satellite) is a three-axis stabilized satellite with a payload that includes a three-channel, earth-imaging radiometer as well as comprehensive communications facilities together with a capability to measure space radiation spectra and densities. It is the space component of the Planeta-C Meteorological Space System. The communications system transmits image data and space environment data to the ground, collects environmental data from Data Collection Platforms (DCP), exchanges satellite-based data among ground stations and will deliver information to the user community on an operational basis.

The GOMS imaging instrument is the Scanning Television Radiometer (STR), which has a capability of generating images each 30 minutes, day and night, using visible and infrared channels. STR images are transmitted to the ground with eight bit radiometric resolution (256 grey levels) at 2.56 Mbps.

As well as the earth-imaging STR, GOMS also carries a complex space radiation and magnetometry monitoring system, described in the reference for further reading, and a communications system. This uses the band at 7.5 GHz (with 1.7 GHz as an alternative) to transmit image and space environment data transmissions to the main data receiving and processing centres. The band at 1.7 GHz is used for the relay of digital, alphanumeric, and facsimile information from the processing centres to user stations. Other bands are used for satellite control, DCP data collection, etc.

Development of the Elektro space component became more and more troubled in the period 1983-1987. Elektro's numerous delays were due to both equipment and software problems, and organisational trouble in the development team.

Only a single Elektro spacecraft was launched in 1994. The troubled spacecraft could not be put into use and stppoed working in 1998. The whole project was finally cancelled, the official reason being the incompetent management of development team at VNIIEM. The Elektro series was replaced by the Lacochkin built Elektro-L series.