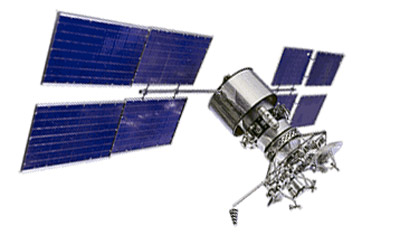 Additional Ekspress spacecraft were to be sold to foreign companies, e.g., Rimsat, Ltd, but these deals did not materialize.

While the Express solar arrays were identical to those on Gals, the spacecraft bus had slightly smaller dimensions of 3.6 m by 6.1 m. A typical Ekspress payload included 10 C-band and 2 Ku-band transponders.

Ekspress 1 reached its checkout location of 70 degrees E at the end of October 1994 and was scheduled to be moved to 14 degrees W shortly after the start of 1995. Only one other of the basic Ekspress series was launched.