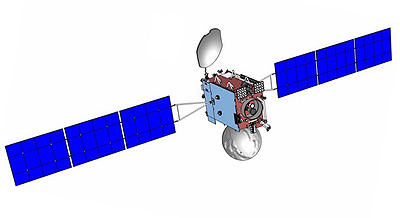 Both satellites are based on the Ekspress-1000 bus and feature 16 Ku-, 1 L- and 20 C-band transponders. The antenna layout is slightly different to allow extending the load bearing structure of AMU-3 throgh the nadir-face side to allow stacking of the satellites.

Both satellites weree launched together on a Proton-M Briz-M (Ph.1 mod. 2) booster in 2021 to their orbital positions located at 96.5° and 145° East respectively. The Briz-M upperstage shut down early and left the satellites short of the target transferorbit. The satellites can make up the underperformance using their electric propulsion systems, but it will take them longer to get to final geostationary orbit.