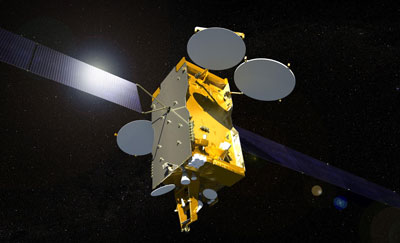 The Russian Satellite Communications Company (RSCC) has selected a team of Khrunichev Space Center and Astrium to build the Ekspress-AM 4 communications satellite.

Ekspress-AM 4, to be delivered late 2010 and positioned at 80°E, is by far the largest Express satellite ever ordered.

RSCC is focused primarily on the development of satellite communications and the broadcasting network in the Russian Federation to secure the common information space across the country. RSCC currently operates 11 satellites from 14°W to 145°E in geostationary orbit, and is currently looking for high power satellites to complement the existing fleet and fulfil growing needs for satellite capacity.

Express AM4 will use Astrium's Eurostar-3000 satellite design. The satellite will be delivered in orbit by Khrunichev Space Center using the Proton launch vehicle. It will be equipped with a 63 active transponders operating in L, C, Ku and Ka bands at a payload power of 14 kW for its planned 15-year service life in orbit. Its ten antennas will provide high performance coverage over the Russian Federation and the CIS countries and its steerable antennas can be used to provide communication to any point within the satellite's visibility.

RSCC ordered in 2012 an identical replacement, Ekspress-AM 4R for a launch in 2013. It was also lost in a launch failure.