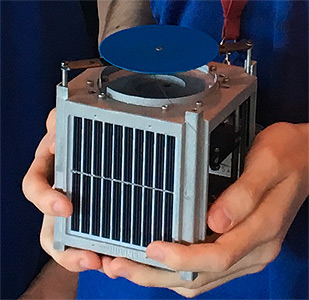 The EdgeCube is a 1U CubeSat technology demonstration mission by the Sonoma State University as a Global Monitor for Earth's Ecosystems.

Scientific investigation mission designed to take global measurements of the red edge that monitors a sharp change in leaf reflectance in the range 680 to 750 nm from changes in vegetation chlorophyll absorption and mesophyll scattering due to seasonal leaf phenology or stress. It will enable tests of different red-edge analysis techniques that are particularly suited for detecting long term change in large, relatively homogeneous ecosystems is to see if they change over time.

The payload consists of six pairs of photo-sensors and filters that are pointed normal to the spin axis to scan the Earth.

It was selected in 2017 by NASA's CubeSat Launch Initiative (CSLI) to be launched as part of the ELaNa program. It was launched on the Dragon CRS-19 mission to the ISS, where it was mounted to the SEOPS-2 deployer on Cygnus CRS-12 to be deployed above the ISS orbit.