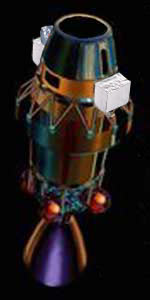 The DUVE (Diffuse Ultraviolet Experiment) is a secondary experiment on the Geotail launch sponsored by NASA. This is the first in a series of secondary payloads that are carried aboard whenever there is excess payload capability on the primary mission. It remained bolted to the Delta-6925 second stage.

The objective of this experiment is to perform sensitive spectroscopy of diffuse emissions from the interstellar medium to increase the understanding of the dynamics and evolution of the interstellar medium and the Galaxy. The DUVE system was be turned on after Geotail's deployment was complete. DUVE was flown strictly on a non-interference basis with the primary mission and will not receive any ground commands.

This experiment operated for about 4 hours when the battery power on the expended Delta-6925 second stage is exhausted. Detector images (256 pixels spectral × 32 pixels imaging) were telemetered from the spacecraft during ground station contacts. These images were telemetered multiple times over many ground station passes, hence, many data dropouts were able to be corrected. The end result was 19 images obtained from 4151 seconds of observation time.