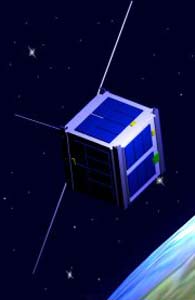 DTUSat (Danmarks Tekniske Universitet Satellite) is a picosatellite designed and built by students from the Technical University of Denmark, DTU. The main payload of DTUsat is an electrodynamic tether for dumping the satellite. The tether is deployed using a novel yo-yo system, greatly simplifying construction and deployment. A calibrated test transmitter is flown as secondary payload. The satellite is 3-axis stabilized using magnetorquers, while attitude determination is done by a combination of a 3-axis magnetometer and 5 chip scale dual-axis sun angle sensors designed and built for this satellite. The mass of each sun angle sensor including supporting electronics is only 3 g. All flight electronics is designed using modern 3.3 V CMOS integrated circuits, lowering total power consumption to about 400 mW while providing about 10 MIPS for application software.

In order to structure and evaluate the success of the project,the team has set 10 success criteria for DTUsat.

DTUSat 1 was successfully launched by a Rokot-KM booster, but contact with the satellite was never established, the exact reason for this remains unclear. The mission was therfore a failure.