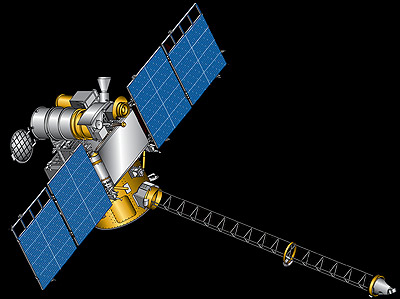 Triana, renamed DSCOVR (Deep Space Climate Observatory) in 2003, is the first Earth observing mission to travel to Lagrange-1, or L1 (the neutral gravity point between the Sun and the Earth). From L1, Triana will have a continuous view of the Sun-lit side of the Earth at a distance of 1.5 million kilometers. In order to obtain the same coverage with current Earth-observing satellites in low Earth orbits and geostationary orbits, scientists must manipulate, calibrate, and correlate data from four or more independent satellites. The full view of the Sun-lit disk of the Earth, afforded by the L1 location, has tremendous potential for Earth science. Triana was to be the first mission to explore this potential.

Triana was to be launched with an Iris Gyroscopic Upper Stage (GUS) on the STS-107 mission in 2003, but was removed from this flight. Triana has been put into a storage container and resides in GSFC's large clean room until a viable flight opportunity has been identified. Triana was renamed DSCOVR (Deep Space Climate Observatory) in January 2003 to reflect the changes the mission has undergone since it was first proposed. In January 2006, DSCOVR had been cancelled, but remained in storage.

Air Force officials proposed in their fiscal 2012 budget plan to fund a launch of DSCOVR to provide competition for potential new entrants to the rocket market. The service is requesting $135 million in the fiscal 2012 budget, sent to Congress in February, to fund the competition for launching. Though the satellite would provide scientific data to government users, it is not a critical payload; thus it is suitable for boost in a test launch that poses higher risk than other Pentagon launches. Congress appropriated $30.1 million in NOAAs 2012 budget to resurrect the DSCOVR program. The 2012 budget also includes money to enable the U.S. Air Force to begin seeking a launch vehicle to carry the 750 kilogram DSCOVR spacecraft in 2014 to the L1 Lagrange point between the Earth and the sun. In December 2012, a Falcon-9 v1.1 rocket was selected to launch DSCOVR in 2014.

For the resurrected mission, the primary instruments required by NOAA are the Faraday Cup and the Fluxgate Magnetometer of the PlasMag suite. All other intruments (EPIC, NISTAR, PHA and Electron Spectrometer) are considered optional. NASA does not have any appropriations to expend on DSCOVR, hence direction as to which instruments will fly are at NOAAs discretion.

The SWFO-L1 mission will be launched in 2024 as a follow-on to DSCOVR's space weather monitoring function.