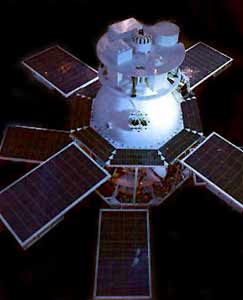 The DS-U3-S satellites were Soviet scientific satellites launched as part of the Dnepropetrovsk Sputnik program. They were used to conduct multispectral imaging of the Sun.

These satellites provided data on the hottest areas of the solar corona in X-ray and ultra-violet spectral regions and were used to assess the quantity of short-wave solar radiation absorbed by Earth's atmosphere.

These satellites were all launched on Kosmos-2 boosters from Kapustin Yar.

The second satellit was Kosmos 203, launched on 5 July 1968. It was operated in an orbit with a perigee of 278 km, an apogee of 518 km and an inclination of 48.4°. It remained operational until on 2 November 1968 it decayed from orbit and reentered the atmosphere.