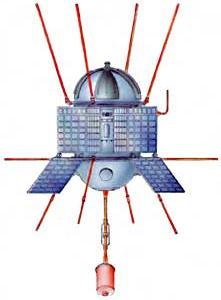 The DS-U2-MG satellites were Soviet scientific satellites launched as part of the Dnepropetrovsk Sputnik program. They investigated the magnetic field of the earth.

These satellites gathered data on Earths magnetic field behavior. The equatorial electrojet effect was measured for the first time. These data are used for studying the globe conductivity. Experiments in space allowed determining the degree of conformity of a true picture with theoretical models created on the basis of observations conducted for centuries from the Earth surface.

Both satellites were launched on Kosmos-2 from the Plesetsk cosmodrome.

The second satellite was Kosmos 356. It was operated in an orbit with a perigee of 226 kms, an apogee of 548 kms, 81.9° of inclination. It decayed from orbit and reentered the atmosphere on 2 October 1970.