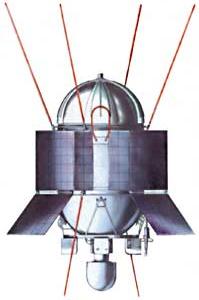 The DS-U2-GF satellite was a Soviet solar research satellite launched as part of the Dnepropetrovsk Sputnik program.

The DS-U2-GF satellite was a small optical observatory with instrumentation for simultaneous recording of solar, stellar, nebula, and Earth upper atmosphere radiation. Instrumentation recordings enabled tracing radiation bursts and decays due to active processes in outer sheaths of the Sun (solar flares). It performed following experiments:

This satellite carried a number of instruments to study the solar radiation: