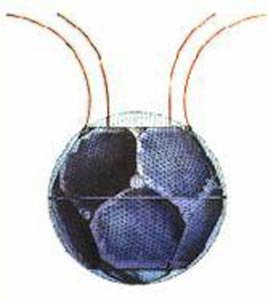 The DS-P1-Yu series of satellites was used to calibrate space surveillance and early warning radars.

This series was the operational follow on to the DS-P1 series. They were used to calibrate the Dnestr (NATO-codename: 'Hen House') space surveillance and early warning radars. These satellites were built on a dodecahedral structure, which carried solar cells. The satelite was covered by a spherical mesh reflector transparent for light-region waves and non-transparent for decimetric and metric radio waves.

79 of these satellites were launched between 1964 and 1976 on Kosmos and Kosmos-2 boosters. 7 failed to reach orbit.