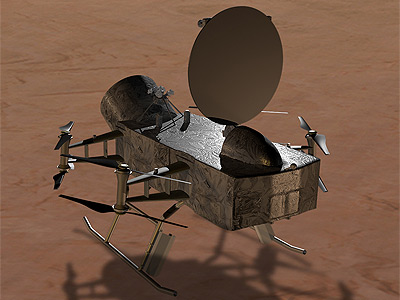 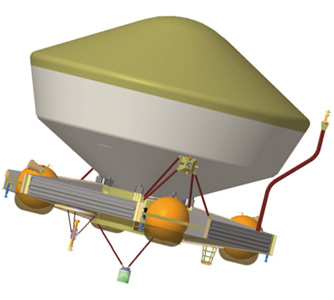 On 27 June 2019, Dragonfly was selected to become the fourth mission in the New Frontiers program.

Dragonfly will be a rotorcraft lander, configured as a large quadcopter with double rotors or an octocopter. Such redundant rotor configuration would be able to tolerate the loss of at least one rotor or motor. Each of the eight rotors would be about 1 m in diameter. Dragonfly is able travel at about 10 m/s or 36 km/h and to climb up to an altitude of 4 km for best scientific value.

Aerial flight on Titan is aerodynamically benign as Titan has low gravity (13.8% of Earth's), low winds, and its thick atmosphere (4 times earth) allows for efficient rotor propulsion. The power required to hover a given mass on Titan is therefore 38 times less than that required on Earth. The RTG power source has been proven in multiple spacecraft, and the extensive use of quad drones on Earth provides a well-understood flight system that is being complemented with algorithms for independent actions in real time. The craft will be designed to operate under space radiation and temperatures averaging 94 K (-179.2 °C). The rotorcraft could travel significant distances, powered by a battery that would be recharged by a Multi-Mission Radioisotope Thermoelectric Generator (MMRTG) during the night. The rotorcraft will be able to travel tens of kilometers on every battery charge and stay aloft for a few hours each time. The vehicle will use sensors to scout new science targets, returning to the original site until new landing locations are verified as safe by mission controllers.

Preliminary studies and modeling contemplate a baseline 450 kg mass for the rotorcraft packed in a 3.7 m diameter heatshield. Samples would be obtained by two sample acquisition drills and hoses, one on each landing skid, for delivery to the mass spectrometer instrument.

The craft will remain on the ground during the Titan nights, which last about 8 Earth days or 192 hours. Activities during the night would include sample collection and analysis, seismological studies, meteorological monitoring, and local microscopic imaging using LED illuminators as flown on Phoenix lander and Curiosity rover. The craft will communicate directly to Earth with a high-gain antenna.

The proposed scientific payload is:

The mission is baselined for a Atlas-5(411) class launch vehicle, which is effectively no longer available at the date of launch. Launch is planned for 2026 with a Venus-Eart-Earth gravity assist trajectory and arrival at Titan 2034. The mission at Titan is planned to last 2.7 years. NASA has requested In September 2020 the Dragonfly team pursue their alternative launch readiness date in 2027. In 2021 the baseline launch vehicle was changed to a fully expendable Falcon-Heavy (Block 5).