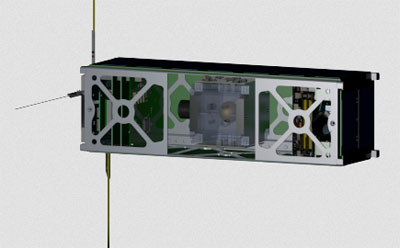 DOSS (Differential Optical Shadow Sensor) is a 3U CubeSat mission of the University of Florida (UFL), Stanford University, KACST and NASA to demonstrate the feasibility of a Gravitational Reference Sensor (GRS) with an optical readout for a drag-free CubeSat mission.

The Drag-Free CubeSat is designed to shield a 25.4 mm spherical test mass (TM) from external non-gravitational forces and to minimize the effect of internal generated disturbances. The position of the TM relative to the spacecraft is then sensed by the GRS with an advanced LED-based Differential Optical Shadow Sensor (DOSS). This position is used in a control system to command a micro-propulsion system and to constrain the CubeSat orbit to that of the TM. In principle, the TM is then freed of all forces but gravity and the hosting spacecraft also follows a purely geodesic orbit.

For the DOSS missions the areas of research are:

A precursor experiment was flown on the Saudisat 4 satellite.

The DOSS cubesat was apparently cancelled.