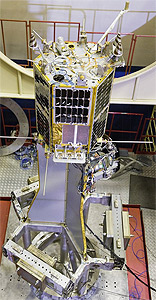 DOSAAF-85 is a small satellite built by ISS Reshetnev together with the Siberian State Aerospace University (SibSAU) of Krasnoyarsk to test advanced technologies. It is named for the 85th anniversary of DOSAAF (Dobrovol'noe Obshchestvo Sodeistviia Armii, Aviatsii i Flotu), an organization responsible for paramilitary training of Soviet youth.

The satellite is based on ISS Reshetnev's Yubileyniy platform, which features an hexagonal prism structure, body mounted solar cells. The payload is partially developed and built by students of SibSAU.

The nature of the prime payload is not yet known. It also carries the RS 44 amateur radio payload.

DOSAAF-85, apparently renamed Radio-2017, was launched in December 2019 on a Rokot-KM booster together with a triplet of Gonets-M satellites and BLITS-M 1, but remained intentionally attached to the upper stage, as it was to deploy the BLITS-M 1 satellite. It appears to be operating and the RS-44 payload was declared operational in late April 2020.