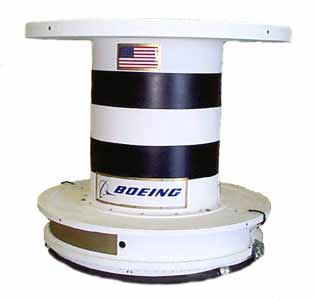 DM-F3 (Delta Mission Flight Three) is a simulated payload made up of steel and aluminum plates and cylinders that produce the same dynamic characteristics and mass properties of a Hughes HS-601 satellite.

Boeing, the U.S. Air Force and the Colorado Center for Astrodynamics Research (CCAR) at the University of Colorado used the simulated payload from the third Delta-III launch to conduct a variety of post-launch missions and studies.

In a unique partnership between the Air Force and private industry, Boeing has prepared the payload to assist in the calibration and testing of electro-optical space imaging systems. The payload was painted with alternating white and black stripes on its midsection, and alternating black and white pie-shaped triangles on the satellite's top plate. Reflective surfaces also have been added to provide laser cross-section targets at both visible and infrared wavelengths.

By viewing the satellite under varying degrees of sunlight and dark, the Air Force will also be able to verify its thermal standards and models for satellites. Other models used to predict payload dynamics will be verified by viewing the spin rate of the payload. The Air Force has also expressed an interest in observing the payload as a calibration target to verify the consistency of radar and optical analyses.

Joining the Air Force in its study of the payload will be Dr. Robert Culp and Dr. Kira Jorgensen from the CCAR. CCAR has extensive experience in characterizing space-weathering effects on satellite materials for NASA. The center has offered to characterize the surface materials samples in their laboratory and to assist in analyzing the measurements obtained by Boeing and the Air Force, which is similar to work CCAR has done for NASA in the past.