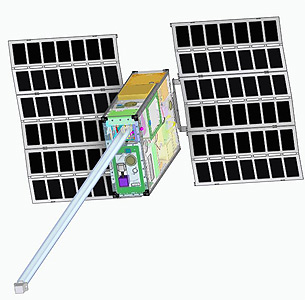 Dione is a 6U CubeSat mission developed by NASA's Goddard Space Flight Center to study how Earths upper atmospheric layers react to the ever-changing flow of solar energy into the magnetosphere.

NASA has selected in May 2020 this pathfinding CubeSat mission to gather data not collected since the agency flew the Dynamics Explorer in the early 1980s. The new mission will carry four miniaturized instruments to study how Earths upper atmospheric layers react to the ever-changing flow of solar energy into the magnetosphere  the enveloping bubble of magnetic field around Earth that deflects most of the particles that erupt from the Sun. Earths upper atmosphere is where most low-Earth-orbiting satellites reside, and their orbits are strongly affected by sudden density changes created by space weather.

Expected to launch in 2022, Dione will help give scientists insights into these physical processes  which contribute to atmospheric drag, a process that causes low-Earth-orbiting satellites to prematurely reenter the atmosphere  and provide data needed to improve space weather forecasts.

The pathfinding Dione spacecraft is a prototype. It would complement the conceptual Geospace Dynamics Constellation, a mission proposed by the 2013 Heliophysics Decadal Survey, which, if developed, would gather similar data from multiple similarly equipped spacecraft. With a constellation, scientists could collect simultaneous, multi-point observations of Earths ionosphere and thermosphere, to learn more particularly how these upper atmospheric layers respond to energy dumped from the magnetosphere.

Dione will provide the first set of energy input data and ionospheric-thermospheric data in more than three decades since NASA launched the Dynamics Explorers in 1981. Where the Dynamics Explorer gathered data once every three orbits, Dione will collect measurements from successive orbits due to Diones lower power requirements and miniaturized systems. It will also do this from a much smaller platform  a shoebox-sized, 6U platform that leverages experience gained from the Goddard-developed Dellingr spacecraft. A team of Goddard engineers and scientists specifically developed Dellingr to improve the reliability and robustness of these tiny spacecraft, but at a dramatically reduced cost. Dellingr launched in 2017.

Dione will be one of the most densely packed CubeSat ever flown, flying four science instruments and one engineering experiment in a 6U CubeSat. Three of the instruments will be provided by Goddard; all were developed with funding from Goddards Internal Research and Development program and all have either flown or are slated to fly during upcoming CubeSat or suborbital missions.

They include a flight-proven fluxgate magnetometer, which debuted on Dellingrs maiden flight, and the Ion-Neutral Mass Spectrometer (INMS), another instrument that flew on Dellingr as well as on a National Science Foundation-funded mission called ExoCube. On both Dellingr and ExoCube, the INMS was slated to measure the matter that creates atmospheric drag on satellites. Goddards third contribution, the Dual Electrostatic Analyzer will fly on Endurance, a pioneering suborbital mission that will directly measure a particular component of Earths electrical field generated in the ionosphere.

Utah State University and Virginia Tech are providing the fourth instrument, the Gridded Retarding Ion Distribution Sensor (GRIDS). GRIDS is designed to measure the distribution, motion, and velocity of ions and will fly on the Goddard-developed PetitSat mission scheduled to launch in 2021.