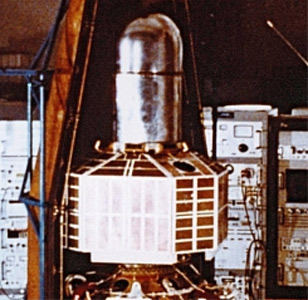 DIAL-WIKA (Diamant Allemagne - Wissenschafts-Kapsel)was a small scientific satellite with four scientific experiments aboard. The name DIAL-WIKA is a contraction from the French words 'Diamant' (diamond) and 'Allemagne' (German) and the German words 'Wissenschaft' (science) and 'Kapsel' (capsule). The experiments consisted of:

The satellite mission was to study time and space variations of the local electron density and the geocorona Lyman-alpha radiation intensity. Study of the equatorial electrojet was also planned. The spacecraft was constructed with a right octagonal prism as a base. This was surmounted by a relatively thick right cylinder that was terminated by a hemisphere. The base measured 68 cm between opposite paris of the large flat sides of the octagon and 62.84 cm between the small sides. The base was about 43 cm high including and adapter section that joined the base to the upper cylindrical section. The upper cylinder / hemisphere was 57.8 cm high with a diameter of about 31.5 cm. The spacecraft was powered by an internal battery that could be recharged by two solar panels. This design was intended to provide effective operation for 26 days. There was no command capability, and the experiment observing sequence and telemetry transmissions were controlled by the sun sensor, which counted the night-to-day transmissions. Continuous power and telemetry were programmed for the first eight orbits, but subsequently, observations and telemetry were programmed for only every third orbit. The spacecraft observations were transmitted on real time only because there was no recorder aboard. Good quality data were obtained from only the Lymna-alpha and the particle detector for about 2 months. On May 20, 1970 the batteries failed and no further transmissions were received.