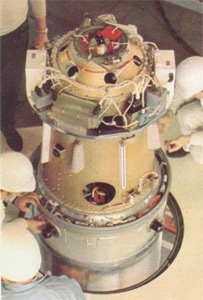 DIAL-MIKA (Diamant Allemagne - Mini Kapsel) was a small technology satellite designed to monitor the performance of the three stage Diamond-B launch vehicle. The name is contracted from the French words 'Diamant' (diamond) and 'Allemagne' (German) and the German words 'Mini' (Small) and 'Kaspel' (Capsule).

The satellite consisted of the third stage and the DIAL-MIKA performance package. It was roughly cylindrical in shape, 1.5 m long and 0.8 m in diameter. The total orbiting spacecraft weight was 111 kg, 40 kg of which was the weight of the MIKA. The battery, thermal design, and spacecraft mission limited the operational lifetime of the MIKA to 1 hr after lift-off. The mission of MIKA was to be completed upon separation of the DIAL WIKA satellite from the third stage and MIKA satellite at about 350 km.

Failure of the MIKA was caused by first-stage vibration between the third and seventeenth seconds of flight. Staging and other launch sequence operations were nominal. This was the first full-flight test of the Diamant-B first stage (also called Azur and L-17) liquid fuel motor. The second stage (Topaz) and third stage motors both used solid propellants.