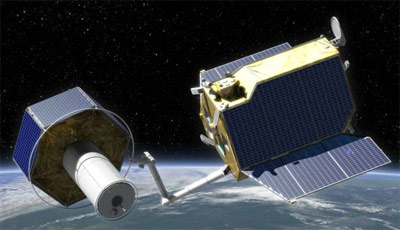 DEOS (Deutsche Orbitale Servicing Mission) was a mission to practice how to complete maintenance tasks  refuelling in particular  that extend the service life of satellites. DEOS consisted of two satellites, a client and a servicer. The client acts as the satellite requiring maintenance or disposal. The servicer carries out the necessary work on the client.

The DEOS project was to be also for the first time demonstrate technologies for the controlled in-orbit disposal of a defective satellite.

DLR Space Administration announced in September 2012, that Astrium Friedrichshafen was selected as the prime contractor for the definition phase of the DEOS

The two satellites were to be launched together and brought into orbit at a height of 550 kilometers. According to planning, DEOS was to be ready for launch in 2018, but the project was cancelled after the definition phase.