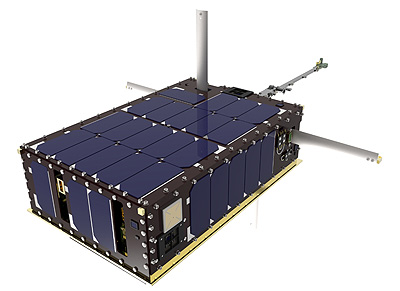 The main objective of the one year Dellingr project is to develop, test, and integrate a new-fangled 6U CubeSat that could reliably and easily accommodate NASA-class science investigations and technology demonstrations at a lower cost.

The CubeSat  known as Dellingr, a name derived from the god of the dawn in Norse mythology  will carry three heliophysics-related payloads. The RBLE Mission is to fill a critical gap for Radiation Belt Storm Probes (RBSP) mission science by providing radial cuts to quantitatively constrain global energetic particle loss. The dynamic variability in the flux of relativistic particles in the radiation belts results from a delicate balance between particle acceleration, transport and loss.

One, the miniaturized ion/neutral mass spectrometer (INMS), actually will be tested for the first time aboard the National Science Foundations ExoCube mission, which will measure the densities of all significant neutral and ionized atom species in the ionosphere, the outer region of the atmosphere where incoming solar radiation ionizes a large fraction of atoms. Two magnetometer systems will be demonstrated as well on Dellingr.

It was selected in 2012 by NASA's CubeSat Launch Initiative (CSLI) to be launched as part of the ELaNa program.

The satellite hitches a ride on a resupply craft headed for the International Space Station (ISS) possibly in August 2017, where it will be deployed in a high-inclination orbit similar to the stations orbital path. Its mission is expected to last up to six months.