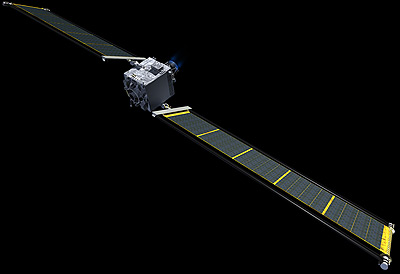 NASA's DART (Double Asteroid Redirection Test) mission is the first ever space mission to demonstrate asteroid deflection by a kinetic impactor. On 26 September 2022, DART is planned to intercept Dimorphos (Didymos B, nicknamed "DidyMoon"), the secondary member of the (65803) Didymos system, a binary Near-Earth Asteroid system with characteristics of great interest to NASA's overall planetary defense efforts.

The DART spacecraft is a simple design - a kinetic impactor with a single instrument, DRACO (Didymos Reconnaissance and Asteroid Camera for OpNav), which will observe the asteroid upon approach. DART will navigate to crash itself into Dimorphos at a speed of approximately 6 km/s, aided by the DRACO camera and sophisticated autonomous navigation software. Two ROSA-type solar arrays provide electrical power to the spacecraft.

The DART payload, Didymos Reconnaissance and Asteroid Camera for Op-nav (DRACO), is a high-resolution imager derived from the New Horizons LORRI camera to support navigation and targeting and to determine impact site and geologic context. The spacecraft is a single-string design with thruster-only control weighing about 500 kg. The DART impact is directed at Dimorphos with a relative velocity of about 6 km/s.

DART carried the Italian LICIACube cubesat, which was deployed 10 days before impact to monitor the effects of DARTs impact.

The European Hera mission will visit the Didymos system in 2026 to evaluate the effects of the DART mission.