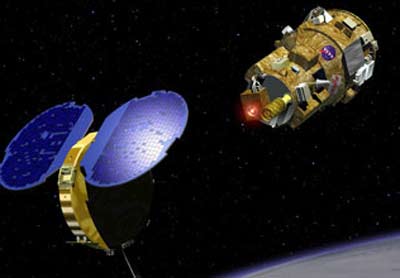 DART (Demonstration of Autonomous Rendezvous Technology) was a technology demonstration mission part of NASA's Space Launch Initiative (SLI) to research and develop technologies that will make space travel safer and more affordable. It was to demonstrate autonomous rendezvous operations.

DART will prove the technologies required for spacecraft to locate and rendezvous with another spacecraft without direct human guidance. While NASA has performed rendezvous and docking missions in the past, astronauts have always piloted the spacecraft. The autonomous rendezvous technologies demonstrated by DART represent a critical step for establishing an autonomous rendezvous capability for the United States and will lay the groundwork for future reusable crewed and uncrewed launch vehicle operations. Future applications of this technology include cargo delivery, space operations for the International Space Station (ISS) and other on-orbit activities such as satellite retrieval and servicing missions.

The DART vehicle was launched aboard a Pegasus-XL HAPS launch vehicle and inserted into a circular parking orbit. The fourth stage of the Pegasus rocket (HAPS) will be a part of the DART satellite, sharing avionic and propulsion components while in orbit. The auxiliary propulsion system includes three hydrazine-fueled thrusters delivering 150 pounds of force. The Pegasus reaction control system includes six nitrogen-fueled thrusters producing 150 pounds of force. DART also uses 16 proximity operations reaction control engines propelled by nitrogen that offer 13 pounds of thrust. The vehicle will then perform a series of orbit transfers to arrive at a point near a target satellite using state-of-the-art GPS relative navigation techniques. Using the vehicle's main instrument, the Advanced Video Guidance Sensor (AVGS), DART will then approach the target (MUBLCOM) satellite and perform a series of proximity operations including station keeping, docking axis approaches and circumnavigation. Finally the vehicle will demonstrate a collision avoidance maneuver then depart the vicinity and transition to its final orbit. The entire sequence will be accomplished under autonomous control.

DART was successfully launched 15. April 2005 at 10:25 a.m. PDT from Vandenberg Air Force Base, Calif., BUT experienced an on orbit anomaly late that day. After a successful rendezvous, acquisition of the target spacecraft, and approach to within approximately 300 feet, DART placed itself in the retirement phase before completing all planned proximity operations, ending the mission prematurely.