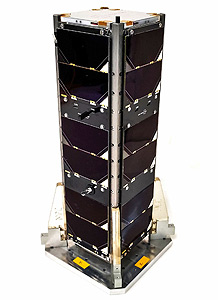 DANTESat is an Italian technology demonstration 3U CubeSat with the primary aim to provide a cultural dissemination about Dante Alighieri Divine Comedy.

The entire opera is engraved on metallic boards on the satellite. The secondary aim of the satellite is the re-entry of the satellite by means of SpaceMinds ARTICA End of Life system (i.e. drag sail) into the atmosphere and the consequently burning of the satellite, replicating Dantes descent into hell, in order to mitigate space debris problem. The satellite's radio transmits the first lines of the Divine Comedy in order to raise awareness and cultural knowledge related to the poet Dante Alighieri in occasion of his 700 years from his death. It additionally transmits housekeeping data through the beacon to the radioham community, which can interrogate the spacecraft making use of both its frequencies.