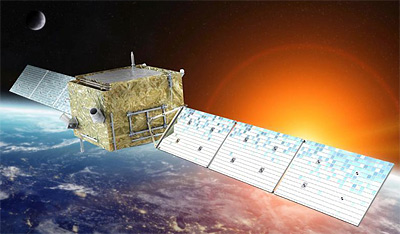 It is one of five satellite missions in the framework of the Strategic Pioneer Research Program in Space Science of the Chinese Academy of Sciences (CAS).

The scientific objectives of DAMPE are to search for and study dark matter particles by conducting high-resolution observation of high-energy electrons and gamma rays, to study the origin of cosmic rays by observing the high energy electrons and heavy nuclei above TeV, and to study the propagation and acceleration mechanism of cosmic rays by observing high-energy gamma rays.

DAMPE operates at a Sun-synchronous orbit with an altitude of 500 km and an inclination of 97.4° with 3-year lifetime. Its total mass is less than 1900 kg, and it was launched from Jiuquan by a CZ-2D (2) rocket.

There are five payloads onboard the satellite:

DAMPE consists of a double layer of plastic scintillator strips detector (PSD) that serves as anti-coincidence detector, followed by silicon-tungsten tracker-converter (STK), which is made of 6 tracking double layers; each consists of two layers of single-sided silicon strip detectors measuring the two orthogonal views perpendicular to the pointing direction of the apparatus. Three layers of Tungsten plates with thickness of 1 mm are inserted in front of tracking layer 2, 3 and 4 for photon conversion. The STK is followed by an imaging calorimeter of about 31 radiation lengths thickness, made up of 14 layers of Bismuth Germanium Oxide (BGO) bars in a hodoscopic arrangement. A layer of neutron detectors is added to the bottom of the calorimeter. The total thickness of the Bismuth Germanium Oxide calorimeter (BGO) and the STK correspond to about 33 radiation lengths, making it the deepest calorimeter ever used in space. Finally, in order to detect delayed neutron resulting from hadron shower and to improve the electron/proton separation power a neutron detector (NUD) is placed just below the calorimeter. The NUD consists of 16, 1 cm thick, boron-doped plastic scintillator plates of 19.5 × 19.5 cm2 large, each read out by a photomultiplier.

The main scientific objective of DAMPE is to measure electrons and photons with much higher energy resolution and energy reach than achievable with existing space experiments in order to identify possible Dark Matter signatures. It has also great potential in advancing the understanding of the origin and propagation mechanism of high energy cosmic rays, as well as in new discoveries in high energy gamma astronomy.