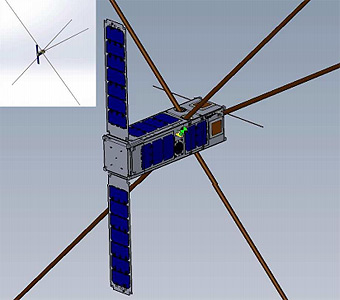 The CURIE (CubeSat Radio Interferometry Experiment) radio astronomy mission developed by the University of California, Berkeley, consists of two identical 3U CubeSats to use radio interferometry to study radio burst emissions from solar eruptive events such as flares and coronal mass ejections (CMEs) in the inner heliosphere.

CURIE measures radio waves from 0.1-19 MHz, which can only measured from space, as those frequencies fall below the cutoff imposed by Earth's ionosphere. It will be able to determine the location and size of radio burst source regions and then to track their movement outward from the Sun. CURIE will provide observations important to understanding the space weather environment.

The satellites will be launched together on a single launcher as a 6U Cubesat and then separate into two 3U Cubesats once in orbit.