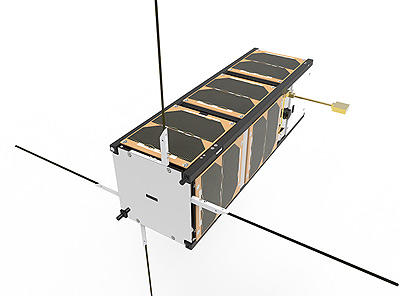 The objectives of CUAVAs flight programs are to train future engineers, industry people, and scientists in space and UAV applications and in commercialisation, to increase the capabilities of CubeSats and UAVs, to solve particular research problems, to flight-test new applications and services, and to develop the future workforce of the space and UAV industries in Australia.

The CUAVA-1 satellite is the first satellite designed, developed and launched by the CUAVA Training Centre. CUAVA-1 will be a stepping-stone for the Training Centre to more refined missions in the future. It will fly first-generation payloads developed by CUAVA partners and directly address the Centres goals.

CUAVA-1 is a 3U CubeSat that will carry significant heritage from the QB50 CubeSat INSPIRE-2. It is the second CubeSat to be developed in quick succession by the Universities of Sydney and New South Wales after the launch of the 2U INSPIRE-2 (AU03) satellite which was deployed from the ISS on the 26th of May, 2017, as part of the QB50 initiative. CUAVA-1 will build on the previous INSPIRE-2 design utilising COTS components and payloads provided from the University of Sydney and the University of New South Wales (UNSW).

CUAVA-1 is a 3U CubeSat with four experimental payloads: