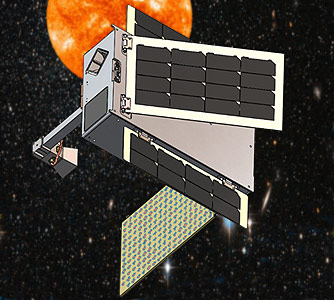 CU-E3 (Colorado University Earth Escape Explorer) is a planned nanosat mission by the University of Colorado, which was selected by NASA's CubeQuest Challenge.

CU-E3 is designed for a communications technology demonstration mission, slated to travel more than 2.5 million miles into space. As a Deep Space Derby entry, the diminutive spacecraft will reach an orbit of about 10 times the distance between Earth and the moon.

Blue Canyon Technologies has partnered with the CU-E3 team and provides the XB1 6U CubeSat saellite body.

CU-E3 will be outfitted with whats called a planar antenna, a deployable array in which all of the elements are in one plane, yet provide a large aperture for directional beam control.

CU-E3 is one of 13 cubesats planned to be carried with the Orion Artemis-1 mission into a heliocentric orbit in cis-lunar space on the maiden flight of the SLS (Block 1) iCPS launch vehicle in 2021.