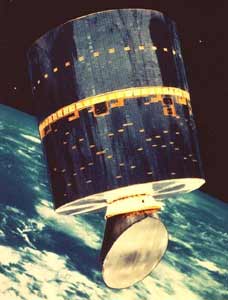 It consisted of a 90 rpm, spin-stabilized cylinder with its curved surface covered with solar cells. The cylinder height was 2.18 m with the antenna extending another 1.31 m along the axis. The spin axis was perpendicular to the orbit plane, but the K- and C-band antenna was despun with a pointing accuracy of better than 0.3°. This small, disk antenna was mounted on the end of the cylinder and was oriented at an angle of about 45 deg° to the spin axis. The satellite had a designed lifetime of 3 years on location near 135° east.

Experiments used 2.1, 2.3, 4, 6, 20, and 30 GHz frequencies for telephone and TV. Experiments studied equipment characteristics, signal transmissions, propagation characteristics, communications system operation, and spacecraft control/operation. Joint experiments with the ECS satellite in Feb. 1979 was one of the objectives.