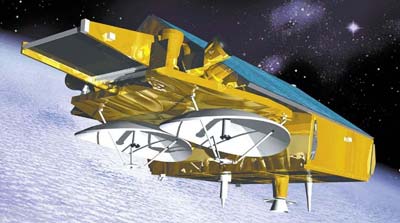 Three instruments are mounted on the spacecraft

The Cryosat spacecraft was lost in a launch failure of its Rokot-KM launch vehicle on 8. October 2005.

In February, ESA received the green light from its Member States to build and launch a CryoSat recovery mission, CryoSat-2 in 2009. CryoSat-2 has the same mission objectives as the original CryoSat mission. It was booked also for a Rokot-KM launch in 2009, but was moved to a Dnepr in 2010 due to the limited availability of Rokot in the required time period. The launch was successful.