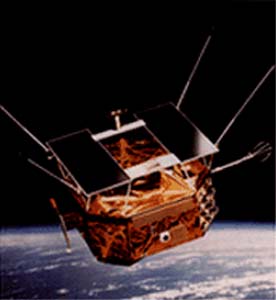 The CRRES (Combined Release and Radiation Effects Satellite) was launched into a geosynchronous transfer orbit (GTO) for a nominal 3-year mission to investigate fields, plasmas, and energetic particles inside the Earth's magnetosphere.

The specified mission duration was 1 year with a goal of 3 years. During this time the CRRES will travel through the severe radiation environment of the Earth's inner and outer radiation belts. There are three primary mission objectives:

As part of the CRRES program the SPACERAD (Space Radiation Effects) project, managed by Air Force Geophysics Laboratory, investigated the radiation environment of the inner and outer radiation belts and measured radiation effects on state-of-the-art microelectronics devices. Other magnetospheric, ionospheric, and cosmic ray experiments were also included onboard CRRES and supported by NASA or the Office of Naval Research.

To accomplish these objectives CRRES was launched with a complex array of scientific payloads. These included 24 chemical canisters which were ejected from the satellite, releasing clouds of metal vapor. Three separate chemical release campaigns were conducted during the first 13 months of the mission. The first 3 years of the mission are under the management of the Air Force Space Systems Division. After that, CRRES will be transferred to NASA where it is planned to join the constellation of spacecraft in the Global Geospace Science Program.

The chemical release project was managed by NASA/MSFC and utilized the release of chemicals from onboard cannisters at low altitudes near dawn and dusk perigee times and at high altitudes near local midnight. The chemical releases were monitored with optical and radar instrumentation by ground-based observers to measure the bulk properties and movement of the expanding clouds of photo-ionized plasma along field lines after the releases occurred. In order to study the magnetosphere at different local times during the mission, the satellite orbit was designed to precess with respect to the earth-sun line such that the local time at apogee decreased by 2.5 minutes/day from 08:00 (LT) just after launch and returned to this position in nineteen month cycles. The CRRES spacecraft had the shape of an octagonal prism with solar arrays on the top side. The prism is 1 m high and 3 m between opposite faces. Four of the eight compartments were for the chemical canisters and the other four housed the SPACERAD and other experiments. The spacecraft body was spun at 2.2 rpm about a spin axis in the ecliptic plane and kept pointed about 12 degrees ahead of the Sun's apparent motion in celestial coordinates.

Pre-launch and in-flight operations were supported by the Space Test and Transportation Program Office of the U.S. Air Force Space Division. Contact with the CRRES spacecraft was lost on October 12, 1991 and was presumed to be due to onboard battery failure.

CRRES was originally configured for a Shuttle launch, but in the aftermath of the Challenger explosion it was shifted to an Atlas-1 launch vehicle, requiring some of the chemical release canisters to be removed. Two of the removed Barium canisters were launched with Pegsat.