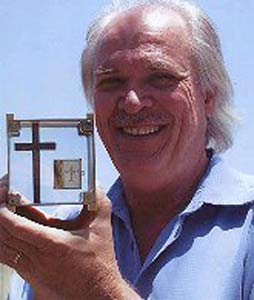 The Cross in Space CubeSat was planned as a memorial satellite by traveling Christian preacher Arthur Blessitt carrying a miniature wooden cross and a microfiche version of the Bible.

The passive satellite was built at One Stop Satellite Solutions (OSSS). It was to be orbited in 2001 as a piggy-back-payload on a Dnepr launch.

For reasons unknown, this free flyer was cancelled and the memorial objects were launched instead in a Celestis container on mission Celestis 07, but were lost in a launch failure. Finally the objects were orbited with Celestis 11.