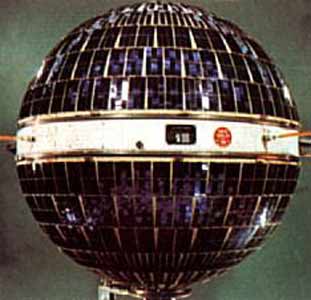 Courier 1A [US Army]

The Courier satellite, launched in 1960 and developed and built under the supervision of the Army Fort Monmouth Laboratories, was the experimental communications satellite that proved high-volume communications, up to 100,000 words per minute, could be relayed through space.

The Courier satellite had first been proposed by the Army Signal Corps back in September 1958, two months before the launch of the SCORE satellite.

On 18 August 1960, an attempt to put the Army developed Courier 1A communications satellite into orbit failed when the rocket exploded about 2.5 minutes after lift­off.

On 4 October 1960, the Army's Courier 1B satellite was launched into low earth orbit. The storage and transmission capacity was much greater than that of the SCORE satellite. It was also the first communications satellite to be powered by long life solar cells to recharge nickel cadmium storage batteries. After completing one orbit, a message from President Eisenhower to the United Nations was transmitted from Fort Monmouth and relayed to a ground station in Puerto Rico. After 228 orbits in 17 days, the payload refused to respond to commands from the ground. It is believed that the clock based access codes got out of synchronization, therefore the satellite would not respond to what it interpreted as unauthorized commands. While operational the satellite had relayed more than 50 million words of teletype data.

A third Courier 1C was built, but not launched.