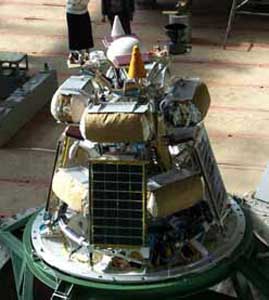 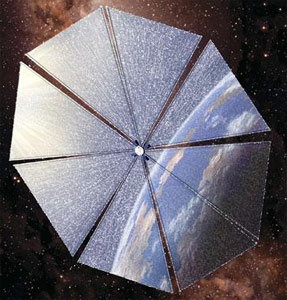 The Planetary Society is developing and conducting a privately funded solar sail project with the Cosmos Studios. The spacecraft called Cosmos 1 is being built in Russia by the Babakin Space Center under a contract to the Society. It will also be launched and operated from Russia.

The purpose of the mission is to conduct the first solar sail flight. Solar sailing is recognized as a future planetary flight technology on the pathway to interstellar flight (using laser instead of solar photons). The image products and story of the mission will be publicly available through the marketing of Cosmos Studios and The Planetary Society.

The project was initiated 15 September 2000. A sub-orbital test flight of the inflatable tube sail deployment system was conducted on 20 July 2001. The spacecraft was launched from a submerged Russian submarine in the Barents Sea on a Volna, a converted submarine-launched ICBM now being marketed for commercial use. Unfortunately the spacecraft failed to separate from the third stage of the rocket, and as a result the sails and the reentry capsule failed to deploy. The capsule continued on its ballistic flight to the Kamchatka peninsula, but has not been recovered so far.

The orbital demonstration flight is being planned for late 2002. The approximately 100 kg spacecraft will be injected into a near circular 800 km orbit with an inclination to the Earth's equator of 78 degrees. Injection into orbit will be carried out by a TPS motor, adapted from a motor previously used for de-orbiting of payloads from Earth orbit. The principal data products from the mission will be imaging, although there will be on-board accelerometers to measure the non-gravitational force on the spacecraft. Two imaging systems will be used, one Russian developed, the other being developed in the US. Tracking and telemetry will be Russian responsibilities although US backups are being considered. An S-band and UHF-band telemetry system will be employed.

The basic deployment and structural technology relies on an inflatable tube system to which the sail material will be attached. The 600 square meter sail will be configured in eight roughly triangular blades. The nominal sail material is 5 micron aluminized, reinforced mylar.

Mission success is defined as flying long enough to measurably increase the orbital energy (or period) from sunlight pressure in controlled flight. This could be achieved within a few days of launch; although the team hope to fly continuously raising the orbit energy for weeks or even months in orbit.

Cosmos 1 was launched on 21.06.2005, but no signals of the satellite were picked up. The launch failed, but circumstances are not clear yet.