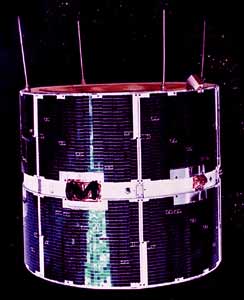 The COS B (Celestial Observation Satellite B) scientific satellite was developed by the European Space Agency (ESA) to study extraterrestrial gamma radiation in the 25 MeV to 1 GeV energy range from a highly elliptical orbit of roughly 100,000 km apogee, 350 km perigee, and near-polar inclination.

NASA provided, on a fully reimbursable basis, the Delta launch vehicle and the associated launch services. The COS B spacecraft was cylindrical with a diameter of 140 cm and a height of 121 cm. Four monopole antennas, protruding 51.2 cm below the bottom of the cylindrical body, gave the spacecraft a total effective height of 172.2 cm. The spacecraft obtained orientation of its angular momentum vector with respect to inertial space using data from an earth albedo sensor and a solar sensor. Spacecraft attitude was adjusted by a nitrogen cold-gas attitude control system (ACS). The ACS included two spin-rate-adjust nozzles to maintain the spin rate at 10 rpm and two precession nozzles to adjust the momentum vector. The spacecraft had a pcm/psk/pm telemetry system with 6.5-W real-time-only transmitter providing a switchable bit rate of 160 and 320 bps and a pcm/psk/pm, up-link/down-link, range-tone command system. Power was supplied by 9480 solar cells mounted on 12 subpanels on the cylindrical body of the spacecraft. Communications, command, and control of the COS-B satellite in orbit were provided by the ESA Estrack network.

COS-B carried a single large experiment the design and provision of which have been the responsibility of a group of research laboratories known as the Caravane Collaboration. The characteristics of the instrument are described below. The Gamma-Ray Telescope performed well throughout the mission: the only complication being the occasional erratic performance of the spark-chamber and the inevitable reduction in performance as the spark chamber gas aged. This aging was, however, minimized by means of a gas-replenishment system that permitted emptying and refilling of the spark chamber. As the rate of gas deterioration decreased with time, it became possible to increase the interval between flushing from its initial value of once every 6 weeks to about once every 36 weeks before the final flushing in November 1981. The spark chamber was still performing creditably at the end of the mission in April 1982.

COS B was initially planned to be launched on the Europa-2 launch vehicle, but due to the unavailability after several launch failures, it was finally launched on an american Delta-2913 rocket instead. It operated for 6 years and 8 months until it was switched off on 25 April 1982.

A repeat flight model COS B2 was considered as a payload of the second Ariane-1 development flight, but was cancelled.