Corsa A, B (Hakucho) 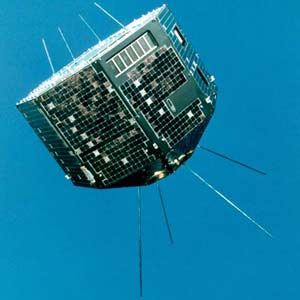 The spacecraft Corsa (Cosmic Radiation Satellite) had the shape of an octagonal prism, with maximum width 80 cm and height 65 cm, and was spin-stabilized at a rate of 5 to 8 rpm. The spin axis was maneuvered by means of magnetic torquing. Eleven X-ray detectors of various specifications were devoted to the observation of cosmic X-rays. Four detectors had fields of view perpendicular to the spin axis and scanned over a wide region of the sky in search of X-ray novae and transients. The other seven detectors had FOVs along the spin axis and were used to study selected celestial objects. Observational data could either be telemetered back in real-time or stored in an onboard data-recorder. Telemetry frequencies were 136.725 MHz at 500 mW and 400.450 MHz at 100 mW.

The scientific objectives of Corsa were

Corsa A failed to reach orbit. Corsa B, after successful launch, was officially renamed Hakucho, the Japanese word for swan.